The dates of Great Britain's history
The British Isles

A short history of Britain 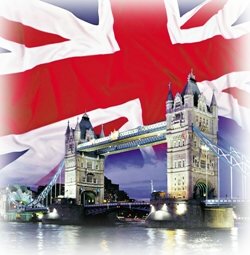 The British Isles were inhabited by Neolithic Man.

The Celts mixed with the original inhabitants.

The Romans conquered England and Wales and stayed for 400 years. Hadrian's Wall was built between England and Scotland, which remained independent.

Angles, Saxons and Jutes started to colonise Britain when the Romans left. By 600AD, they were well established in most of Britain.

The Vikings raided the east coast of Britain and some settled. In 885 the Danes were given a large part of northern England, which was known as the Danelaw, and Danish kings ruled England from 1016-42.

The Normans under William the Conqueror defeated the Anglo-Saxons at the Battle of Hastings. Normans replaced Saxons in most positions of authority and, for a while, French was the more important language. Eventually the two races and the two languages merged to become English.

1215 A treaty called the Magna Carta was signed by King John and his lords. It is an important document on the long road to democracy in that it limits the king's rights and establishes the rights of his subjects.

1282 Wales was conquered by the English king.

1564 William Shakespeare was born: the greatest writer of English that has ever lived. He died in 1616.

1588 The Spanish Armada was defeated , which prevented Spain from invading England.

1603 Scotland and England were united under King James I.

1605 The Gunpowder Plot: Guy Fawkes and other Catholic conspirators tried to blow up the Houses of Parliament when the king was there.

1642-49 The English Civil War took place, in which the king was defeated and later executed by the Parliamentarians. This was followed by ten years when England did not have a monarch, but was ruled by Parliament under Oliver Cromwell.

1750 The start of the Industrial Revolution.

1800 Ireland was joined with Great Britain.

1815 England under Wellington defeated Napoleon at the Battle of Waterloo.

1912 The south of Ireland became independent when the Republic of Ireland (or Eire) was established.

Holidays in Great Britain There are some holidays in G.B. They are Christmas day, Boxing...

The are four seasons in the year: spring, summer, autumn and winter. The winter months...

The U.K of Great Britain and Northern Ireland is a parliamentary democracy with a constitutional...

THE GREAT BRITAIN You’ve been studying English for a long time. But what do you...

London history.
London — the capital of Great Britain When we think...

Places to Visit in England

Places to Visit in England.
Stonehenge: a prehistoric complex on Salisbury Plain, Wiltshire, regarded as...

London (Places to Visit) London often gives the impression of being more comfortable with its...